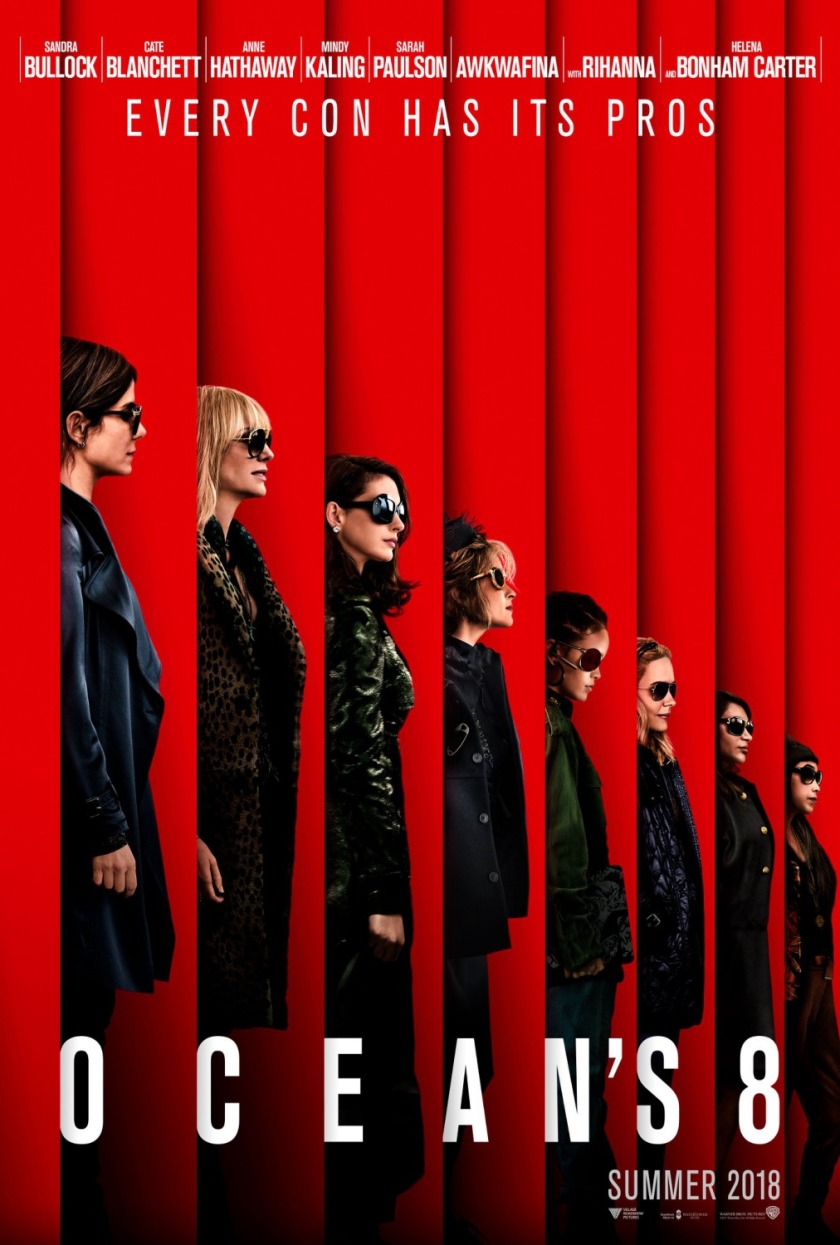 “You’re only as good as your last film” is a classic Hollywood quote, and it’s classic because it’s true. As an actor you can star in the biggest hit film of the year, and then follow it up with a real stinker the following year, and a year after that, many won’t remember you for the hit film, they’ll remember you for the stupid stinker! By 2016, such was the case with Sandra. She had two huge successes in 2013, The Heat and Gravity together amassing more than a billion dollars worldwide. There truly was nowhere for her to go but down, and down she went. Her next live-action film Our Brand is Crisis was one of her all-time massive flops, making only 7 million dollars on a 28-million-dollar budget. The film proved, sadly, that Sandra couldn’t open a movie based on only her name alone, and that for her follow-up she needed to focus on a property that would hopefully bring more audience members to the theater.

When Ocean’s Eight was first announced as her follow-up project to Our Brand is Crisis, I rolled my eyes. I didn’t mind seeing an all-female version of the Ocean’s franchise, and I was intrigued to see her make a huge studio comedy again, but everything about the movie felt like too much of a safe bet. She took a risk before with Our Brand is Crisis, the film failed, and so naturally she had to take on a project that would make a gazillion dollars whether or not she sleepwalked through her leading role as Debbie Ocean, the sister of George Clooney’s Danny Ocean. Nevertheless, the more cast members that were announced, the more excited I became. Cate Blanchett is one of my favorites, and giving her the Brad Pitt role was a masterstroke. Anne Hathaway’s casting perked my interest. Everybody, really, perked my interest, including Gary Ross, director of the first Hunger Games film, as well as the glorious Pleasantville, who came on board as the director. I knew the film wasn’t going to be an award-worthy masterpiece, but I thought it would be loads of fun. And, despite its flaws, fun this movie definitely is!

Ocean’s Eight opens on a startling image: Sandra in an orange prison uniform! She finally has a shot at being released, and she pleads her case that she is a changed person. Of course as soon as she leaves jail, she immediately resorts back to her old ways, stealing from stores and impersonating other people to get a free hotel room for the night. But Debbie Ocean has a much bigger plan up her sleeve, something she’s been thinking about for hundreds of nights in her prison cell: she’s going to rob a diamond necklace at the Met Gala. In true Ocean’s fashion, she needs some help, and she enlists both friends and strangers to help pull this heist off, including her old pals Lou (Blanchett), Amita (Mindy Kaling), and Tammy (Sarah Paulson). Helena Bonham Carter, Rihanna, and Awkwafina round out the star-studded cast, along with Hathaway, who is hilarious as a spoiled celebrity named Daphne Kluger.

This film has a fast-paced, breezy quality that is infectious from beginning to end. You can really turn off your brain in this one and just enjoy the ride, watch beautiful actresses do their thing and exude charm and power and humor. Any scene of these ladies just talking around a circle and bouncing ideas off each other is pure bliss; I actually wanted more of these scenes, ones that don’t merely function on moving forward the plot. Some of the film’s first half is too endlessly focused on setting up the heist, but thankfully, once the big Met Gala heist sequence is off and running, the entertainment level skyrockets. The heist that plays out in thirty minutes or more is genuinely surprising and suspenseful, and the big twist at the end that reveals what these girls were actually up to is a wonderfully satisfying reveal.

I enjoyed the film a lot when I saw it opening day and have happily watched it twice since. A life-long Sandra fan (in case you didn’t realize that by now), I had been waiting a long time for this one. 2016 came and went without a new Sandra film. She finally started shooting Ocean’s Eight at the end of 2016, so I assumed the movie would be released the following summer, following the pattern for Ocean’s Thirteen, or Christmas 2017 at the latest, following the pattern of Ocean’s Eleven and Ocean’s Twelve. When the film was eventually announced to be released in the summer of 2018, I wasn’t thrilled. Since her break-out role in Speed, only occasionally did Sandra take a hiatus, like after Two Weeks Notice when she pursued producing and working on architectural projects. But even that hiatus between 2002 and 2004 was shorter than this one. The thirty month period that passed between Our Brand is Crisis and Ocean’s Eight is the longest stretch of time ever between Sandra movies, beating the twenty-seven months that passed between Two Weeks Notice and Miss Congeniality 2: Armed & Fabulous.

Thus, in some regard, Ocean’s Eight got a pass from me just because I was dying to see Sandra in something, anything. I would have liked after thirty months for her to star in the greatest, most monumental film of her entire career, but if I wasn’t going to receive that, Ocean’s Eight would do. There’s a lot to enjoy in the film for Sandra fans. The opening ten or so minutes are actually my favorite, before the rest of the gang shows up, before the mechanics of the plot get into motion. Just watching Sandra wearing fabulous clothes and resorting to her thief-like ways for a few glorious scenes is a total blast. I also love her chemistry with Cate Blanchett in the film (rumors still abound that their characters had a past romantic relationship) as well as her physical transformation in the heist sequence, which, after more than three decades on screen, finally allowed her to use her fluency in the German language! The ending of the film is solid, although I think a short cameo from Clooney in the last scene would have been a nice touch, reuniting him with Sandra for the first time since Gravity and showing that Danny Ocean isn’t actually dead.

Where Ocean’s Eight falls short, ultimately, is in its themes, or lack thereof. At one point Debbie has a great line where she basically states the reason all eight people have to be women is that none of them will be noticed. The film definitely pursues this theme occasionally, but by the end, what the movie is mostly about is these women pulling off a heist and then going their separate ways, enjoying new financial independence and leading richer, happier lives. This is an Ocean’s movie. We’re not looking for poetry, for life-changing thematic themes, but I do feel the movie could be about a little more. It could offer more emotional threads among the characters, give us more moments of their internal lives. In Sandra’s huge canon of films, Ocean’s Eight is one of her emptier vehicles. It does the job, it entertains, it leaves you with a smile on your face at the end, but not much else. This isn’t a fault of this particular Ocean’s movie. All three of the male-dominated prequels are the same. Ocean’s Eleven is a kinetic thrill ride, but nothing more. Ocean’s Twelve is a complete mess, the worst of the series by far. Ocean’s Thirteen was better but still just an action exercise. Ocean’s Eight is the best since the 2001 version, with lots more story possibilities for potential sequels, and if we do ever get a sequel, I’d like to see Debbie’s character explored more, all the characters explored more, rather than have eighty percent or more of the movie just focus on the heist.

If nothing else, Ocean’s Eight was a huge financial success, further proving that women can carry a movie, and that Sandra, yes, was still a box office draw. Made on a 70-million-dollar budget, the film pulled in double that, 140 million in the United States alone, plus an additional 160 million internationally, bringing the film’s world-wide total to about 300 million, not too shabby. As I said before, this film wasn’t one of Sandra’s bigger risks, but no matter — it was still a genuine blockbuster, one that offered audiences everywhere another splendid adventure with one of their favorite movie stars. Ocean’s Eight won’t go down as one of Sandra’s best — I would put it in the middle somewhere, alongside Two Weeks Notice and The Heat — but it sure was nice to see her again after a nearly three-year wait. The best news of all? This was to be her first of two films of 2018. Yes, Sandra had one more surprise in store for her fans right before Christmas: her first ever horror film.

Best Line: “If you’re going to have a problem with stealing, you’re not going to like the rest of this conversation.”

Ocean’s Eight follows the Ocean’s Eleven trilogy starring George Clooney, Brad Pitt, and Matt Damon, the first of which was a remake of a 1960 film of the same name starring Frank Sinatra and Dean Martin.

Debbie speaks German as a part of her cover. Sandra really is fluent in German.

Jennifer Lawrence was in talks to be in the film, which would have reunited her with her Hunger Games director Gary Ross, but she later dropped out.

The music that plays as the team enter the Met Gala, “Lara’s Theme,” was also the music that Sandra’s character Gracie Lou Freebush plays on the water glasses in Miss Congeniality.

This was Sandra’s third live-action film in a row that had George Clooney somehow in the mix. He co-starred with Sandra in Gravity, co-produced Our Brand is Crisis, and of course has a connection to Ocean’s Eight as well.

Sandra’s longest-ever gap between movies since becoming a movie star, 30 months between 2015’s Our Brand is Crisis and 2018’s Ocean’s Eight.