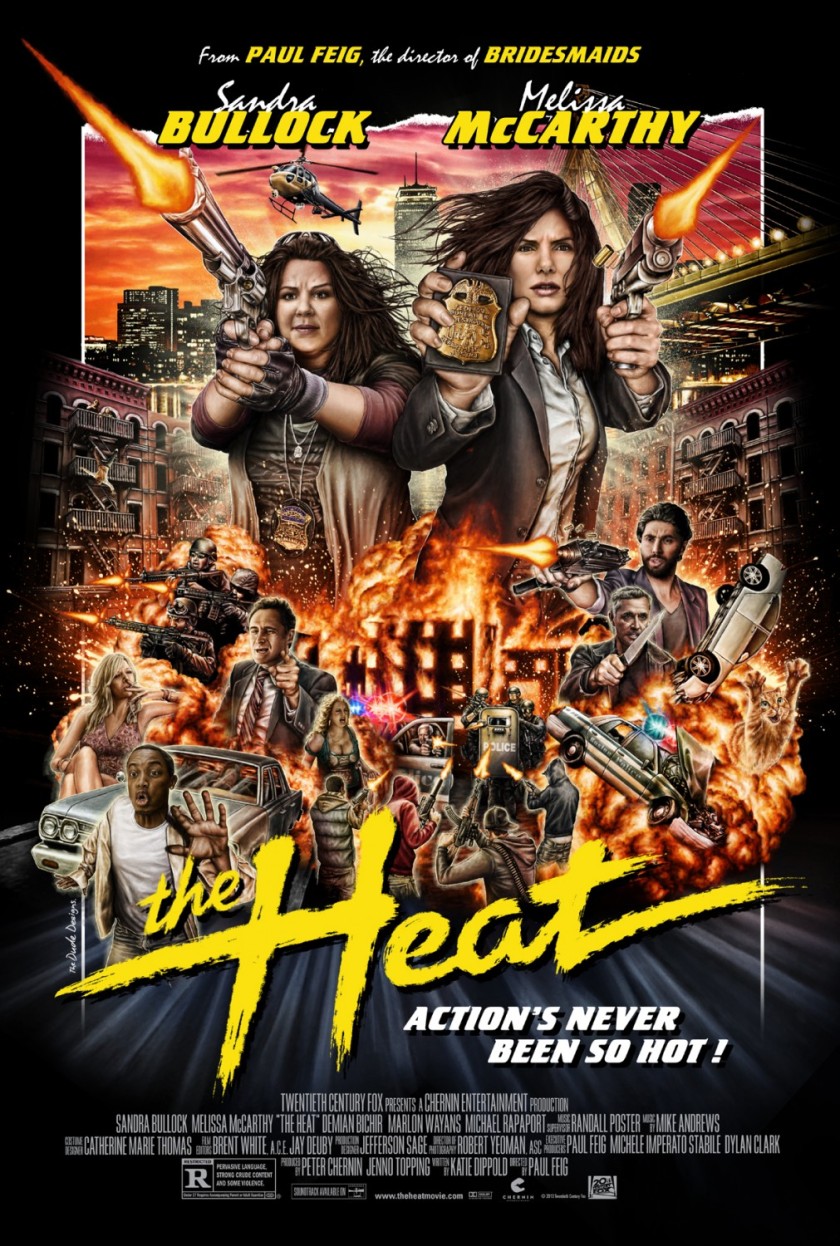 After Sandra started winning awards for dramatic work, some might have assumed she would say good-bye to comedy for good. But Sandra ultimately did what she does best — surprise us. She’s one of the best in the business because she’s able to effortlessly bounce back and forth between genres, and now that some rich opportunities have come her way, 2013 arrived with not one but two hugely anticipated Sandra movies. And they couldn’t be any different from each other. Who but Sandra follows a raucous R-rated buddy comedy with a quiet two-person thriller set in space? 2009, with the varied trio of The Proposal, All About Steve, and The Blind Side, looked to be her most epic year ever.

Following her Oscar win for The Blind Side, Sandra shot Extremely Loud & Incredibly Close and Gravity back to back, two films that screamed class and innovation, and it looked like she might, at least for awhile, move away from the comedy genre. While The Proposal was a smash, All About Steve was a disaster, and if Sandra was going to return to the kinds of films most of her casual fans love her in, she was going to have to choose carefully. In the end, she couldn’t have picked a better project than The Heat. While this isn’t one of her most memorable movies, the film offers two hours of glorious entertainment simply in watching two gifted comedic actresses share the screen together. And best of all, this film gave Sandra the opportunity to say something in a comedy she hadn’t said since Two if by Sea, nearly twenty years prior. She gets to say fuck. A lot.

The Heat was a wise choice for Sandra to make because it would have been startling for this movie not to work. Sandra is just naturally funny, so pairing her up with the hilarious and talented Melissa McCarthy was a masterstroke. McCarthy first made an impression on me when she played Sookie on Gilmore Girls, and for so many years, she was always just Lorelai’s best friend in Stars Hollow. Then, along came Bridesmaids, the funniest movie of 2011. And in an ensemble of great actresses, McCarthy became the standout, earning a rare Academy Award nomination for a comedic performance. McCarthy and that film’s director, Paul Feig, wanted to work on another project again — who better than Sandra to join the party? Sandra has seemed lost in some of her recent comedies, like Miss Congeniality 2 and All About Steve. But she’s in top form here, with a natural chemistry with McCarthy that makes for a real crowd-pleaser.

Sandra plays Sarah Ashburn, a Special Agent who cares to focus more on her career than her personal life, and who doesn’t always blend well with all the other FBI operatives in the field. When she’s up for a promotion, she’s forced to go to Boston to solve a case and prove her worth. But little does she know that a very different kind of interrogator — ruthless, potty-mouthed detective Mullins (McCarthy) — is about to become her full-time partner, as they try to take down an invisible drug lord. They’re combative at first, but as their inner demons come out, they start to realize they’re more alike than they realized, and what started as contentiousness, soon becomes a budding friendship.

One element about this role I noticed immediately was the similarities it shares to other characters Sandra has played in past films, many of which have been comedies. A woman who’s forever single, and dedicated only to her job? Think Lucy in While You Were Sleeping (token taker), or Angela in The Net (computer programmer), or Margaret in The Proposal (book editor). And then there’s Grace in Miss Congeniality, the FBI agent who had to become a beauty contestant to take down the bad guy. When I first saw the trailer of The Heat at the end of 2012, my heart dropped a little, because it looked like Sandra was just playing a variation on her Miss Congeniality character. FBI agent? Check. Socially awkward? Check, check. Was this film just going to be Miss Congeniality 3?

Thankfully, Sandra gives this character her own unique spin. She’s not a goofy slob like Grace, or a hopeless romantic like Lucy, or a ruthless career woman like Margaret. Special Agent Ashburn is good at what she does, but she doesn’t relate well to others, and has to make an effort to fit in. We discover her family history, and how that has affected her life. We learn of her high school yearbook, which was greeted with only two signatures, both by teachers, one saying, “Good luck, student,” and the other saying, “It will get better.” She has never been in a stable relationship, and has never been able to make a true friend. Enter the life force that is Mullens. Different from Ashburn in every way, Mullens is still instantly drawn to the less confident Ashburn, and the two become a team to be reckoned with.

Looking over Sandra’s career, it’s surprising to note that she had never made a major R-rated comedy before. There’s the little seen When the Party’s Over from 1993, and her first big dud post-Speed, 1996’s Two if by Sea, but over the last twenty years, she has stuck mostly to PG-13-rated entertainments. I’m sure this has never been a conscious effort on her part — maybe a smart R-rated comedy script had simply never come across her desk — but one of the joys of The Heat is in watching McCarthy, and Sandra toward the end, drop one F-bomb after another. One review pointed out how much more interesting the movie might have been if Sandra and McCarthy had switched roles, and I’d be lying if I didn’t think the same thing. It might not have worked, but wouldn’t it have been fun to see them try? As Ashburn, Sandra doesn’t start talking like McCarthy until the finale, when she lets loose — to hilarious results. One of the movie’s most memorable scenes has her calling a bunch of cops jerks, then shit jerks, then… well… you’ll just have to see the film to find out.

It has been noted as being a rare female buddy cop movie, but what I found even more remarkable about The Heat was that it shows two strong women on-screen who are one-hundred-percent committed to their jobs, the kind that men typically occupy. Hollywood studio execs are always surprised every few months when a movie starring women opens well and, even better, has staying power at the box office (Bridesmaids, for example, opened with $26 million but stuck around long enough to make $167 million domestically). Opening The Heat at the end of June, in a summer of bloated, male-driven action movies, was a brilliant release strategy; more women are seeing movies at this time of year than men, and they want to see strong, capable women on-screen, especially those whose lives don’t revolve around relationships with men. The Heat isn’t a great film, but it’s further proof that audiences are hungry for funny female-driven pictures.

So how is The Heat, just as a movie, especially in a summer so bereft of good comedies? It’s one of those films that get the job done, that leaves you walking out of the theater smiling. It does have a few very big laughs, and the chemistry between the two leads is fantastic. It’s entertaining throughout, and it slips in a cute underlying message about friendship, especially with the closing scene, involving the aforementioned yearbook, that works way better than it deserves to. The sequence where they get drunk is a standout, and a moment toward the end, when something sharp finds itself in Sarah’s leg, is hilarious. Ultimately, though, the film will not be remembered as one of Sandra’s best comedies, for one simple reason: the plot of the movie, involving the investigation of the Boston drug lord, is sloppy and uninvolving. The lame plot of The Heat is basically an excuse to team up these two gifted comediennes, and all of the scenes that involve them playing off each other work great; it’s when the stupid story keeps rearing its ugly head that the movie goes off the rails a little, especially with its unbelievable reveal of the villain, and the way each bad guy in the last half-hour keeps talking when in reality he would just be shooting the two women dead. While the movie is fun, and the performances of both stars are terrific, a really great story would have made this a modern comedy classic.

The Heat falls somewhere in the middle of Sandra’s comedies, with While You Were Sleeping remaining the all-time champ, and All About Steve forever rotting in the sewers of movie hell. I’d put it one notch below Miss Congeniality and The Proposal, but one notch above Two Weeks Notice, and plenty of notches above Practical Magic, Forces of Nature, and Miss Congeniality 2. It will be interesting to revisit The Heat in a few years to see how it holds up. And who knows? With a $40 million opening weekend, and a final gross that equaled the box office total of The Proposal, it’s possible The Heat 2 could be in our futures. But as Sandra said in an Extra interview in the summer of 2013, “My sequels have never done well,” so I’d imagine it would take an awesome script to bring the two back. If nothing else, it would be pretty easy to top Miss Congeniality 2 and Speed 2. If they ever were to make a second one, I would suggest they put more effort in the central investigation of the storyline, give it a little more weight and meaning. These are two of our brightest, most interesting actresses working today, and they deserve only the best.

As we move into the future, past Gravity and beyond, it’s a relief to note that Sandra, who could have stayed the route of many Academy Award winners and churned out stupid blockbusters and pretentious dramatic drivel, has chosen to take chances with ambitious projects, and have a little fun with boozy, outrageous comedies like The Heat. She may be referred to as Oscar winner Sandra Bullock from here on out, but she’s not afraid to go back to what we all know and love her in — the comedy genre. Here’s hoping Sandra keeps doing what she’s doing, jetting back and forth between the prestige and the puerile, and having a load of fun in the process.

Best Scene: After avoiding a potty mouth seemingly her entire life, Sandra finally lashes out at the Boston cops.

Best Line: “You just gave me a ring, MOTHERFUCKER!”

Director Feig plays the hospital doctor who complains about the excessive profanity.

The man McCarthy kisses in the bar is her real life husband and Bridesmaids co-star Ben Falcone.