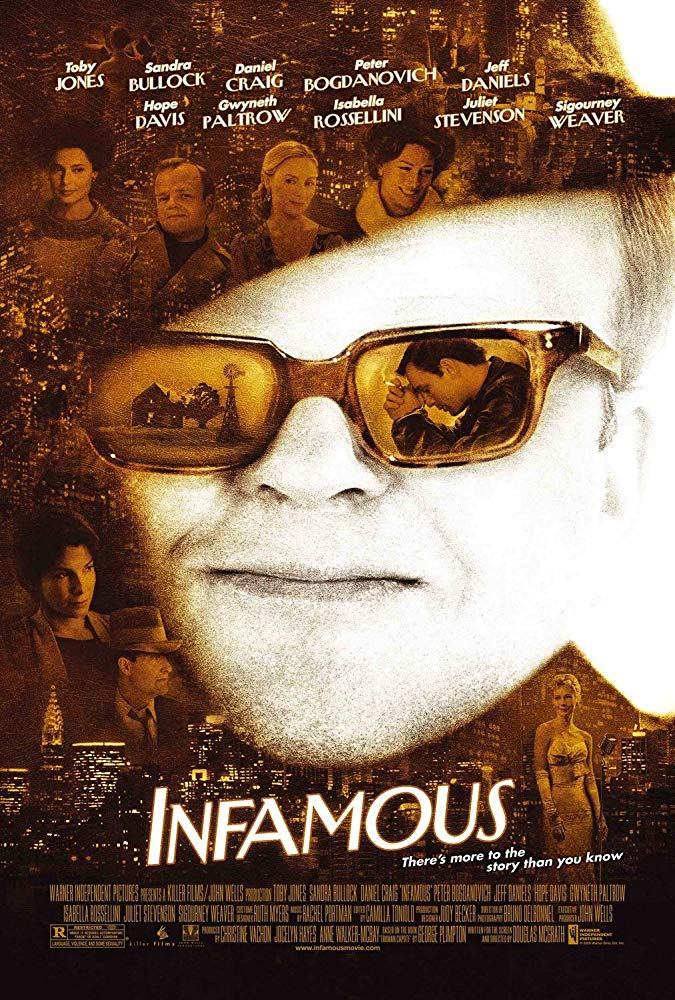 When Sandra walked onstage at the 85th Annual Academy Awards in 2013, stunning in a black Elie Saab cap-sleeve gown, she was introduced, as, how else, “Oscar winner Sandra Bullock.” For too many years Sandra kept picking the wrong projects, kept working with the wrong directors, and we fans hoped an opportunity would come along that would finally showcase her true talent. She had her moments in Hope Floats and 28 Days, but the first dramatic film that really opened up directors’ eyes to what she could do dramatically was Crash, which went on to win the Oscar for Best Picture. In 2010, just four years after Crash’s big win, she finally received her first Oscar nomination and award, for The Blind Side. But is The Blind Side Sandra’s golden achievement? Is Crash? No.

Until Gravity, Sandra’s best dramatic performance on film was in the little-seen and mostly ignored 2006 film Infamous, in which she stars as the famed Pulitzer Prize-winning author Harper Lee. Why was this film ignored to the extent it was? It had nothing to do with the quality of this film; it is truly an outstanding, expertly crafted picture about Truman Capote’s writing of his most famous book, In Cold Blood. No — Infamous was ignored because the film Capote, about the exact same subject matter, was released a year before to great critical acclaim, multiple Oscar nominations, and an Oscar win for the late Philip Seymour Hoffman.

When Infamous opened just six months after that year’s Oscar telecast (the same one in which Crash had its big victory), nobody cared. While people saw both Deep Impact and Armageddon, and both Antz and A Bug’s Life, they embraced Capote, yet pretended like Infamous didn’t exist. It’s a shame because while Infamous treads on the same territory, it approaches the subject matter with a different angle, bringing in more of Truman’s life in New York and allowing room for humor. It boasts a tremendous cast that includes Gwyneth Paltrow, Sigourney Weaver, Jeff Daniels, and Daniel Craig, pre-James Bond. Most of all, Toby Jones’ performance as Truman Capote is astounding, just as good as Philip Seymour Hoffman’s and possibly even better, since he closer resembles the real Capote in his physicality. If Infamous had been released a year before Capote, Jones would have been guaranteed an Oscar nomination, no doubt, and even Sandra herself might have been up for her first nomination as well. She’s that good in this film.

Catherine Keener was nominated for an Academy Award for playing Harper Lee in Capote, but does anyone remember that performance? Sandra makes a much more memorable impression in Infamous, with her subtle, natural turn as the famed literary giant — she also, if you check out old photos of the To Kill a Mockingbird author, looks almost exactly like her. Truman Capote surrounded himself with New York’s richest socialites, but he also remained close with one childhood friend — Ms. Lee. In the film Truman is so intrigued by the story of a deadly shooting in middle-of-nowhere Holcomb, Kansas, that he enlists his friend Harper to accompany him to the town to investigate the story for a potential long-form article, which of course became the acclaimed book, In Cold Blood. It is this riveting section of the movie that Sandra has the most screen time.

Jones and Sandra don’t make for an on-screen duo that would necessarily scream great chemistry, but they are terrific together, radiating a warm, natural friendship that really does feel like it goes back decades. There is an interesting dynamic between the two, Sandra with her mousy hair and lack of make-up and reserved behavior, and Jones with his spot-on voice and crazy outfits and showy demeanor. There are plenty of scenes of Sandra in the first third of the film where she doesn’t say a word but simply listens, to Jones, to stories, to the characters she meets in the small town. It’s a fascinating change of pace for an actress who normally is the center focus of the narrative.

Does she have a big “Oscar” scene in the movie? The film integrates interviews with its characters throughout, and Sandra gets not one but two great moments to tell stories about Truman. But it’s one of her final scenes in Kansas, when she confronts Truman for using his ways of fiction to tell the dark true story of the brutal murders, that gives her the best chance to shine. With her perfected Alabama accent, a cigarette between her fingers, and obvious disdain for what Truman is trying to accomplish, she nails this hard-to-watch argument between two old friends, with both sides offering views that make sense. It’s a scene like this one that Sandra shows just the kind of actress she can be, when she’s met with the right script, director, and character.

For Sandra fans, Infamous is one of those movies of hers that might have fallen through the cracks. She’s not the lead, it’s not a comedy, it didn’t receive any acclaim or awards consideration. But all these years later, not having the former 2005 film Capote to consider, it’s much easier to admire Infamous for the magnificent film that it is. Writer/director Douglas McGrath, whose previous credits include Emma and co-writing the script to Woody Allen’s Bullets Over Broadway, made wise choices with his ensemble cast, but especially with Sandra, who rarely plays a role this tender, this observant. As her career finally started taking a sharp turn for the better, with meatier roles and more complex dramatic fare, this film provided Sandra her most interesting role on screen to date. She may have won the Academy Award for The Blind Side, but she’s just as good, if not better, in Infamous.

Best Line: “You shouldn’t be doing what you’re doing!”

The film’s original title alternated between Have You Heard? and Every Word is True.

Sandra did not personally meet Harper Lee, but she did extensive research, including listening to her voice in audio clips and studying her handwriting on microfiche at the New York Public Library.