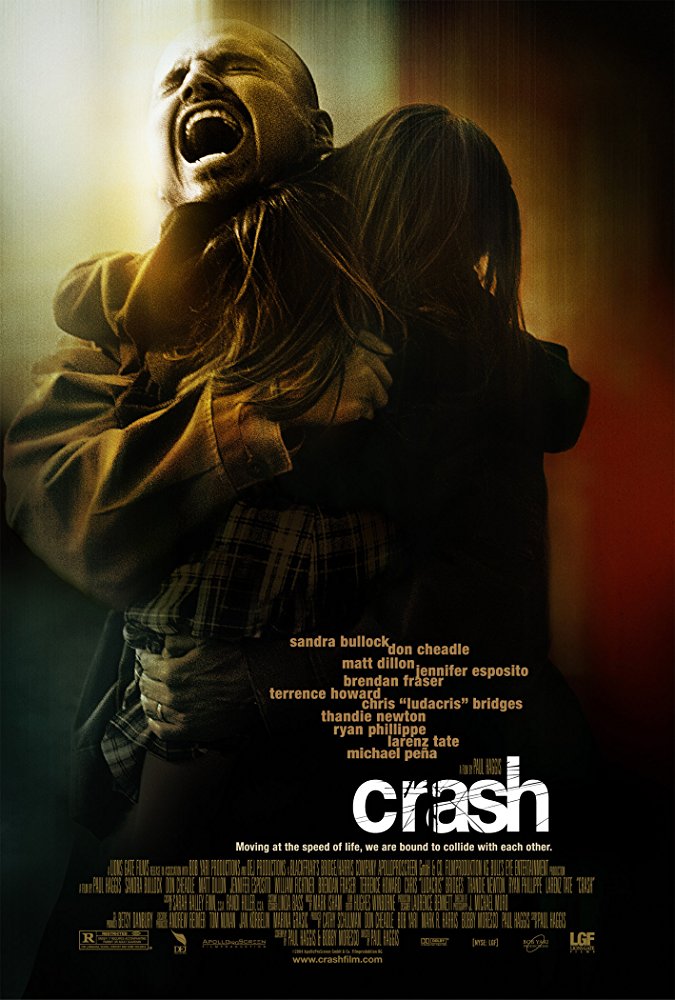 Over the years, even Sandra’s biggest fans had to admit that she wasn’t picking the finest scripts, not choosing the most talented directors, not working in the kind of genres that fully showcased what she had to offer us. Since her breakout in Speed, Sandra had appeared in a handful of Oscar friendly movies, like A Time to Kill and In Love and War, but nothing she made from 1994 to 2004 necessarily set awards season on fire. She made some fun comedies and decent dramas, but where was the breakthrough we fans were hoping for? Who would give Sandra a chance to shine not just as a deft comedienne, but as a fine dramatic actress? The answer to that question was writer/director Paul Haggis.

It was exciting to hear the news in late 2003 that Sandra had joined an ensemble drama, even though there were no expectations for the kind of movie Crash would become. Would it be a masterpiece a la Magnolia, or a forgettable film like Crossing Over? For nearly a year, news on the production was minimal. We fans yearned for every piece of information we could find at this time because Sandra had taken a hiatus from movies that was supposed to be six months, but turned into two-and-a-half years. In this time, between Two Weeks Notice and Miss Congeniality 2, she worked on Crash for four days in Los Angeles, flying herself out to the set and filming inside director Haggis’s own home. On her first night of filming, the shooting shut down momentarily, and at first Sandra thought she was going to be fired. (It turned out Haggis had suffered a minor heart attack.) She would spend months filming other movies, and less than a week on this one. Could Crash really be the breakthrough she needed? In every sense, yes!

Sandra is not in very much of the film. Featured in five scenes, one of which lasts barely thirty seconds, she’s in it less than most of the other major actors. Matt Dillon and Thandie Newton received the most acclaim, and Sandra wasn’t nominated for any major acting awards, only sharing in the Screen Actors Guild ensemble win that pushed the movie forward toward its controversial Best Picture win at the Academy Awards. This was the first time, however, that directors of a higher caliber finally witnessed the power of what Sandra was capable of, especially with a strong script and a chance at doing something different.

When does Sandra play unlikable? Not often. When had she ever played a thoughtless, hopeless, demonizing witch of a racist who spews nothing but vulgarities out of her mouth? Her first scene in the film is routine, but her second is revolutionary, the kind of sixty seconds of screen-time that literally revamps an entire career.

Her scene in the hallway at her home, when she demands her husband (Brendan Fraser) change the locks again in the morning because she’s scared the Hispanic locksmith will go out and sell the keys to his friends, is electric acting against type. You see the pain in her eyes, you know that she’s been molded into this person throughout many years of increasing solitude, but it’s still shocking. Sandra is a big star and might not have wanted to be seen in this kind of dismal light. But she commits one hundred percent to this character and this scene, and shows us for the first time the kind of dramatic power she’s capable of.

Her other great scene in Crash takes place in one long tracking shot, when she talks to a “friend” on the phone as she tries to reason why she wakes up every morning angry and bitter. The scene starts casually, but then slowly transforms into one of intense sadness. We all have felt her kind of rage from time to time, and Sandra shows how this kind of spirit can weigh down a person day after day.

Crash premiered at the Toronto Film Festival in 2004 to minimal press, then got what appeared to be a quiet release, in the first week of May 2005. The film received decent to good reviews and quickly disappeared, only to resurface at the end of the year as screeners from Lions Gate started making the rounds. Awards didn’t look to be in the cards for Crash — it barely registered with nominations at the Golden Globe awards.

But after it won the Best Ensemble in a Motion Picture award at the Screen Actors Guild Awards, it earned multiple Academy Award nominations, including Picture, Director, Screenplay, and Best Supporting Actor for Dillon. It wasn’t the prestige factor that won Crash all its awards — nobody making the low-budget film at the time probably thought awards were in store two years later — but the tone, the feeling, the overwhelming emotion of the movie ultimately registered with voters, and audiences, around the world. Is Crash deserving of a Best Picture Oscar? No. It’s not half the film Magnolia is, P.T. Anderson’s ensemble film from 1999 that wasn’t even nominated for Best Picture, and it hasn’t lasted the way Brokeback Mountain has. But it’s a solid film, one that benefited many of the actors in the film, like Terrence Howard and Dillon, and certainly Sandra.

Sandra has still made some bad movies since Crash, but the quality certainly saw a noticeable uptick. Without her acclaimed performance in Crash, would we have had her overlooked turn in Infamous? Would John Lee Hancock have pursued her so hard for The Blind Side? Would she have appeared in a Stephen Daldry film, or starred in a space epic directed by Alfonso Cuaron? It’s all possible, but those few minutes of dramatic intensity she delivered in Crash finally, thankfully, catapulted her to another level.

Best Scene: Sandra lashes out at Fraser about wanting the locks changed.

Best Line: “This time it’d be really fucking great if you acted like you actually gave a shit!”

Sandra has less than six minutes of screen-time in the entire film.

Sandra was so committed to appearing in the film that she bought her own plane ticket to fly to the set.

John Cusack was the original choice for the role of District Attorney Rick Cabot, which eventually went to Brendan Fraser.

The film was followed by a 2008 TV series with the same title. Lasting thirteen episodes, the series starred Dennis Hopper, Sandra’s Speed co-star.