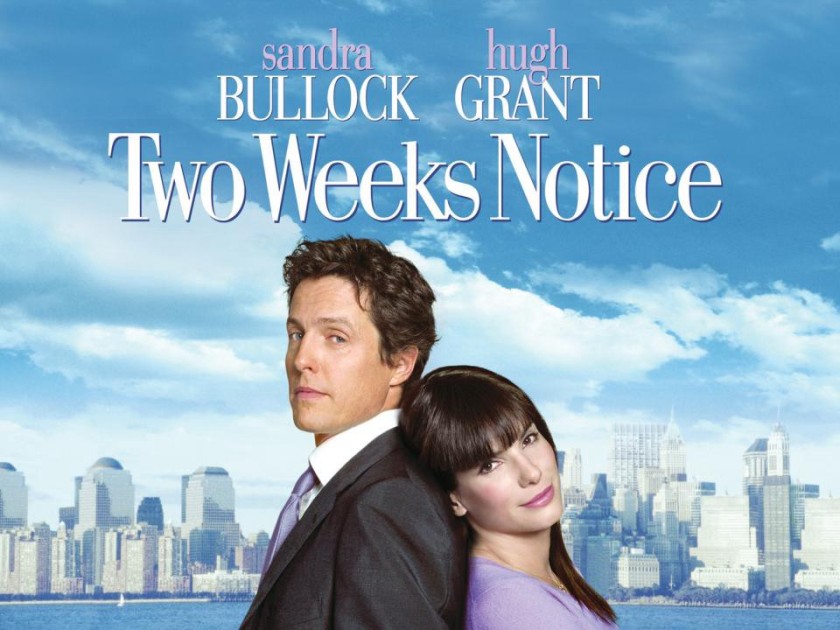 It was supposed to be Sandra’s ultimate romantic comedy. First, there was While You Were Sleeping, still to date Sandra’s best rom-com. She went on to make other films that weren’t full on romantic comedy but had strong elements of them — Two if by Sea, Forces of Nature, and Gun Shy. After the release of Two Weeks Notice, Sandra said she was done with the genre (even though she would go on to make another one in 2009, with The Proposal). She had worked with the best in Hugh Grant, after all, and had allowed her frequent writing collaborator Marc Lawrence to direct her for his first time. In looking at Two Weeks Notice all these years later, how has the movie held up?

It’s fine. It was fine in 2002 and it’s fine today, with a handful of scenes that put a smile on your face, and decent chemistry between the two. At the time, the film was noted as the first to shoot in New York City after the 9/11 terrorist attacks, and the location serves the movie well. What doesn’t serve the movie as well is its obvious plot, which we know from the first “meet-cute” between Sandra and Grant what exactly is going to happen.

She’s an activist named Lucy who works hard to save legendary buildings from destruction. He’s a rich playboy named George who doesn’t care about these buildings and will gladly knock another one down to make a quick buck. She starts working for him, and she realizes over the course of many months that he’s never going to change. Will he change, though? And will he decide at the late hour that he’s in love with her? Gee, let me guess.

There was potential for something greater here, but unfortunately it was written and directed by Marc Lawrence, who hasn’t exactly had the best track record. His first collaboration with Sandra was on Forces of Nature — not the best sign — and the only movie they worked on that turned out better than expected was Miss Congeniality.

But Lawrence is also responsible for the insipid sequel Miss Congeniality 2: Armed and Fabulous, as well as the later lackluster Hugh Grant efforts Music and Lyrics and Did You Hear About the Morgans? His resume reads like a late night spent in movie hell. In this regard, Two Weeks Notice works as well as it does due to the charm of the two stars. Put Sandra and Grant in humorous situations, and you’re bound to get some entertainment value out of it. They work well together, so much so that it would be interesting to see the two work together again under the hands of a more assured director, and with a more imaginative screenplay.

As the movie stands, it’s an occasionally amusing trifle, and not much more. The most memorable scene takes place when Lucy has to desperately use the bathroom, in a freeway packed with parked cars no less, and ultimately does her business in the back of a dirty RV. It’s something we rarely see a big star like Sandra do on screen, and, unfortunately, it’s a moment some of us can relate to. The finale is predictable and not as romantic as it could have been, but the very last scene, which takes place in Lucy’s apartment, is terrific, the kind of spontaneous moment that the movie should have had more of throughout its 100-minute running time.

So is Two Weeks Notice Sandra’s ultimate romantic comedy? It’s the kind of mediocre entertainment that would be fine to watch late at night on TBS if nothing else is on, but it’s not half of the movie the funnier The Proposal is, and it has nowhere near the charm and pleasure and romance of While You Were Sleeping. Two Weeks Notice isn’t bad, but it could have been better.

Best Scene: Sandra eats one too many chili dogs and finds the urge to go to the bathroom while stuck in a massive traffic jam.

Two Weeks Notice was Sandra’s third solo outing as a producer, following Gun Shy and Miss Congeniality. This was another hit for Sandra, grossing about $200 million worldwide.

Sandra’s name is Lucy in both While You Were Sleeping and Two Weeks Notice. She also orders Chinese food in both from Mr. Wong.

Donald Trump appears as himself.