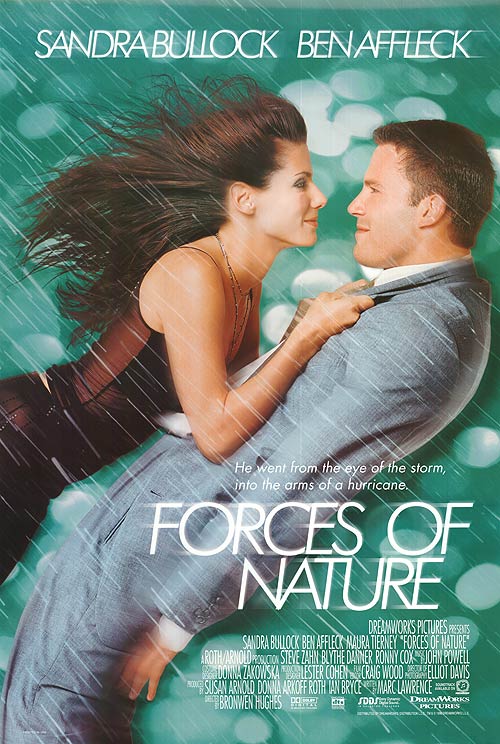 The mediocre train of Sandra’s career continues. Starting with 1996’s underwhelming Two if by Sea, Sandra had a string of movies for the next few years that were underwhelming at best and abysmal at worst. Most will probably remember Speed 2, but few will remember the contrived road trip romantic comedy Forces of Nature. Released in March 1999, the movie hasn’t exactly aged well. And while it’s not a complete mess — Sandra actually has a unique character to play here, unlike her flavorless role in Practical Magic — the movie suffers from a stupid story, poor casting, unfunny jokes, too many coincidences, and a lack of chemistry between the leads.

It’s easy to see what attracted Sandra to this character — it’s unlike any she had played before. Sarah Lewis is an erratic free spirit who dresses wildly and speaks anything and everything that’s on her mind. When we first see her, she’s making out with a total sleazebag who looks like he’s been dealing dope since the age of three. Her hair has purple steaks, her clothing is black and tight, and she has enough eye shadow to cover her entire face. After playing less flawed characters, ones who are always likable and firmly planted on the ground, Sandra, if nothing else, got the opportunity here to play someone different.

The plot of Forces of Nature surely had to be inspired partly by John Hughes’ 1987 comedy gem Planes, Trains, and Automobiles, as both films are about a man trying desperately to get home for an important occasion, while an eccentric fellow traveler keeps causing him trouble and prevents him from reaching his destination in a timely fashion. In the case of Forces of Nature, a conservative goodie-good Ben Holmes (Ben Affleck) is trying to get from New York to Savannah for his wedding to a faithful, beautiful woman (Maura Tierney), but his plane crashes, he finds other means of transportation, and the unstable Sarah becomes his unwanted travel mate. Will he make it to his wedding? Will he even want to, with Sarah now in his life? And do we care?

The quality of this movie can be summed up by a Matt Damon quote in Kevin Smith’s Jay and Silent Bob Strike Back. Playing themselves, Affleck makes fun of all the “girly” roles Damon took in 1999 and 2000 (like All the Pretty Horses and The Legend of Bagger Vance), but then Damon strikes back with, “I take it you haven’t seen Forces of Nature.” While the director of Forces of Nature, Bronwen Hughes, who later transitioned to television work, definitely tries to give the movie a distinct and sometimes effective visual style to separate it from other romantic comedies of the time, the movie suffers from more simple matters. Sandra is fine in the movie, but she seems about ten years too old for her role, and she has zero chemistry with Affleck, who basically has a blank stare throughout the movie. Even worse, he plays such a bland dweeb of a character that we as viewers lose interest in him pretty fast. If the film had been all about Sandra’s character, and her quest to reunite with her son, there might have been something here.

In a 2010 interview with Charlie Rose, Sandra said that she quit film acting in 2002 for two and a half years because she wasn’t happy with her work. While Sandra has never discussed Forces of Nature in any major interviews since the film’s release, it’s appropriate to assume this movie is one she would consider among the work she’s not proud of. During the film we discover that Sarah hasn’t seen her son in ten years, and at the end their reunion has the potential to be a rare honest moment. Unfortunately, it’s handled so saccharine — the boy immediately warms up to her as if she’s been coming over every weekend — that the Sarah story’s conclusion doesn’t offer effective closure.

Forces of Nature isn’t Sandra’s worst film, but it’s certainly one of her most forgettable. Sandra gives the wild role her all, but unfortunately she’s paired with a leading man who looks like he’d rather be anywhere else, and an absurd plot that may be the most contrived in her entire filmography. Thankfully the road of her career would take a positive turn in the year 2000, but at the end of 1999, Sandra was at a crossroads.

Best Scene: Sandra and Affleck officially meet on the airplane before it crashes.

Best Line: “Why didn’t I think of that when I was unconscious and bleeding from the head?”

Screenwriter Marc Lawrence went on to write Miss Congeniality 1 & 2 for Sandra, as well as Two Weeks Notice, his directorial debut.

The producers had been looking for a Sandra Bullock “type” for the role of Sarah. Finally, they ended up just asking Sandra herself!

Matthew McConaughey presented Sandra with her Teen Choice Award for Choice Hissy Fit. She was also nominated for Favorite Actress — Comedy/Romance at the Blockbuster Entertainment Awards, but lost to Drew Barrymore for Never Been Kissed.