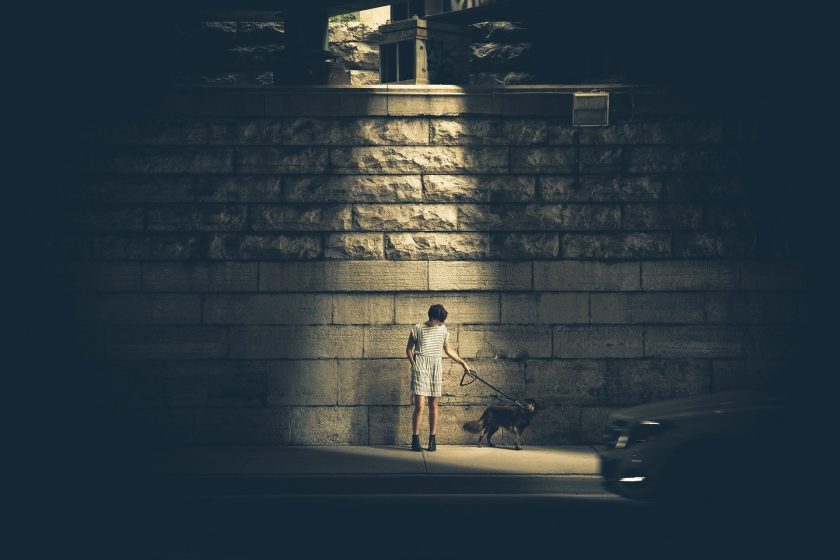 The first third of Mark Haddon’s novel, The Curious Incident of the Dog in the Night-time, is magical storytelling, the kind that grabs you from the opening chapter and doesn’t let go. I bought this novel in 2004, when I was a sophomore in college down in Los Angeles, and I have somehow allowed eight years to pass with letting it merely collect dust on the shelf. I’m so happy to be finally reading it because I’m immersed in this unusual and touching story of a 15-year-old boy’s honest quest to find the murderer of a poodle dog that died on his neighborhood street.

The first element of the book that works wonders, which without it wouldn’t be nearly as engaging, is the voice of the main character, 15-year-old Christopher John Francis Boone. It must have been difficult for Haddon to capture the voice of a teenage boy with autism, but he does so in a way that feels authentic, and not cloying or maudlin in the least. In many ways Haddon improves here on what Jonathan Foer did with his autistic character in the more cloying Extremely Loud & Incredibly Close, by letting the reader truly get inside the head of this kid and follow his adventure without any unnecessary outside perspectives. I love the way Christopher talks to the reader, and the way he manages to get his ideas across in unusual but clear ways. I also admire the way in which Haddon splits up the narrative by offering a chapter that takes us into the main story, and then a chapter that gives us more insight into Christopher.

The second element that I love is the mixed media presentation, which, like in Extremely Loud & Incredibly Close, can be so outlandish and frequent to bog down the central narrative. Haddon, instead, uses the mixed media to bring out even more of Christopher’s dynamic personality. He lets specific scenes play out like they would in a typical novel — the long, well-written scene with the gossipy Mrs. Alexander comes to mind — but other scenes, the ones that give us more insight into Christopher, are made even more successful through the use of the media. I love that Haddon uses prime numbers at the start of each chapter; just the titles of each chapter give us a glimpse into the main character’s mind. Christopher’s list of behavioral problems and the diagram of the red cars bring Christopher even more to life. And the story about the math wizard with the world’s highest IQ is demonstrated to a superb extent through Haddon’s use of diagrams and symbol, allowing the story Christopher is telling to completely come to life.

The last element that I appreciated about this first third of the novel was the way in which it actually reads like a novel that a character like Christopher would actually be writing. It all even reads like it’s happening in real time, with Christopher even detailing a scene with his friend Siobhan about how he doesn’t know if he can keep writing if he can’t solve the central mystery that revolves around Mrs. Shears’ dog. The book is certainly well-written, but it actually feels like Christopher could be writing it, rather than an adult like Haddon. And when Christopher starts learning about his mother’s past, we feel his surprise and sadness about his mother’s wrongdoing, to an even more immediate effect. Unlike many novels, where the perspective is up in the clouds and we have to work hard to dig deep under the characters’ skin, Haddon presents this novel in the most immediate manner possible, with Christopher our eyes and ears for what’s to come.

The second third of Mark Haddon’s novel, The Curious Incident of the Dog in the Night-time, continues with what is one of the more engaging stories I’ve read in a long time. I think one of the hardest things to do for an author is to tell a story from the perspective of a character who he or she is not, and Haddon has done a remarkable job putting us into the head of Christopher.

One element I really enjoyed about this second part was the building of the complicated relationship between Christopher and his father. So many controversial details about the family’s history come to light in these pages that we struggle as a reader deciding if we like the father or not. He’s a guy who obviously loves his child and wants to put his best interests first, but does he do so in the most effective way? Their first scene in this section is a heated one, in which the father finds out that Christopher’s been talking to Mrs. Alexander. He screams at Christopher, grabs him, wants to hit him, screams at him, “Holy fucking Jesus, Christopher, how stupid are you?” — he is borderline cruel to his son in this scene. But then he tries to mend things by taking Christopher to the zoo, and later, when he finds out that Christopher has discovered the truth about his mother, he doesn’t yell at or hit him; he bares his soul to him. While there’s clearly friction between the two, Haddon is smart to give the dad dimensions and not allow him to degenerate into a one-dimensional douchebag.

Another element I enjoyed in this section was the reveal of the mother’s whereabouts, and how Haddon tells her surprising story through letters. Sometimes I’m wary of novels that use letters to get across too many plot points, but Haddon uses them very effectively, giving us not only insight to what Christopher’s mother did but how she is similar to her son in many ways. Haddon is smart, first of all, to keep the first letter short, so Christopher and we as the reader can try to surmise what this letter means, given that it was written after her supposed date of death. When Christopher finally allows himself to read the other letters — four in total, in this section — we discover that she is living a life in London with her new husband and has been writing to her son once a week, even though she’s never received a letter back. (This part of the story reminded me of The Color Purple.) His mother gets a lot of information through to us regarding what happened and why she left, but furthermore, she shows us through her writing style ways in which she is similar to Christopher — many of the sentences in the letter are written in run-on sentences. I also liked Haddon’s attention to detail by having her misspell a lot of words. And I loved the way Christopher stops in the middle of that last letter to finally put all the pieces together. It’s a heart-stopping moment captured perfectly by Haddon.

Lastly, I was impressed and surprised that Haddon didn’t leave the mystery of the title to be solved in the last few pages. Instead, he reveals that Christopher’s father killed Wellington, on page 120, with still another 100 pages to go. In most books the author would leave the mystery of the title to be solved at the very end, but I like that Haddon is more interested in Christopher’s journey and not so much with who or what killed the dog. The father’s admission to this dreadful deed shakes Christopher to his core, and sets him off on his quest for London. I really love this so far and can’t wait to see how it ends!

The last third of Mark Haddon’s novel, The Curious Incident of the Dog in the Night-time, finishes one of the best and most intriguing novels I’ve read this year. I thought I knew where these characters were going to end up, but I was happily surprised, and I was impressed by how Haddon wraps all the storylines up.

The first element I really enjoyed in the last section of the book was the realistic chaotic nature of the London mass transit scene. I studied abroad in Germany in 2005 and spent a three-day weekend in London, and Haddon nailed the confusion and the excitement of the Tube transportation method in the Underground. He does a great job racketing up the tension, with Christopher trying to navigate his way to his mother, trying to figure out the correct route on various maps and signs. We know Christopher is not in his element here, and we worry for him in this time of both physical and emotional crisis. I also loved the mixed media method of showing the various diagrams that Christopher is seeing, which gives every reader the clear understanding, even if he or she has never been to London, the kind of madness it truly is to navigate one’s way around the Tube. When Christopher finally makes it to his mother, we are relieved, and anticipatory of the big emotions and questionable circumstances that are to come in the narrative.

The second element that worked well was the raw, unnerving reaction Christopher’s mother has when she learns that the boy’s father has kept her letters away from Christopher all this time, and worse, has told the boy that she died in the hospital way back when. Her reaction makes so much sense. First, she says, “Oh my God,” and second, she stays quiet for a long while, like she’s trying to sort through her thoughts. Then, thirdly, she lets out a long wail that Christopher describes is similar to that of an animal. Our feelings are mixed on the mom because she did in fact abandon her child, but through her letters we learn that she still deeply cares for her boy — and she didn’t deserve to be considered a dead woman. The mother isn’t one to just hug her boy and then send him straight back to his father; she has a new life, a new man, but she throws it all away to move back to Swindon with Christopher. She recognizes that she’s made a mistake, and wants to start things over with her son. All it takes is that one reaction, a loud wail that sounded like an animal, to show the reader that she is going to be there for her boy.

The third and final element I really loved was the father’s well-intentioned attempt to make amends with his son in the end. Like the mother, Christopher’s father has his positive and negative qualities throughout the book, and in the last third, Christopher does all he can to stay away from him, going as far as to lock himself in his bedroom and not face him if the man is in the same space. But in the end, his father finally comes around, recognizes his mistakes, and gives his boy a dog, a two-month-old golden retriever, bringing the story full-circle. In the end, the father wants his son to be happy, and in his final line, he says he would never, ever hurt him. The father makes some questionable decisions over the course of the book, but in the end, we believe him. Both his parents want the best for Christopher, and after we turn the final page, we believe that, while he’s going to have a more difficult life than others, he’s going to be OK, and, best of all, he’s going to be happy. This was a glorious book.