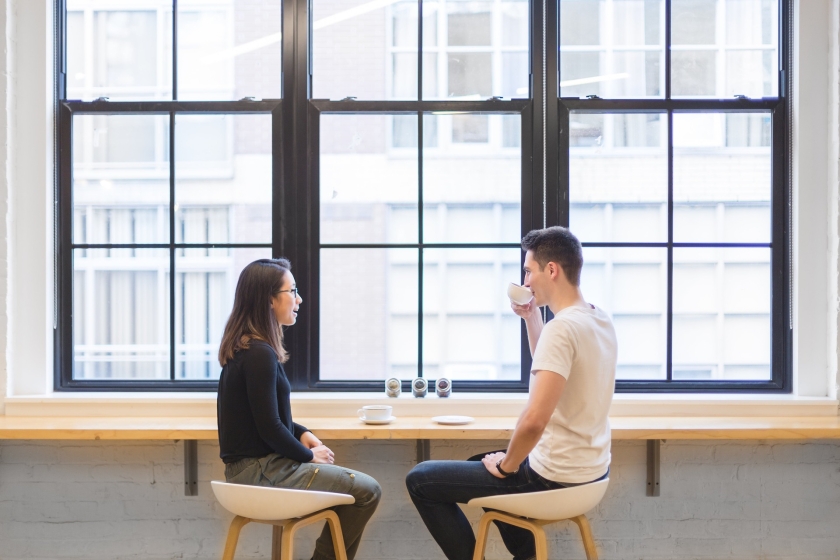 One of my five favorite films of the last fifteen years is Before Sunset, the glorious romantic sequel to Before Sunrise. It’s a film that shouldn’t even exist, given the low box office returns of Richard Linklater’s 1995 story of two people in their early twenties who meet on a train and end up spending the next twenty-four hours together walking around Vienna. Hollywood doesn’t make sequels to films that don’t make loads of money, so Before Sunset is that enigma — a sequel made purely out of love for its characters rather than financial gain. At the end of Before Sunrise, we’re left wondering if Celine (Julie Delpy) and Jesse (Ethan Hawke) will reunite in six months and continue their whirlwind romance. In Before Sunset, we learn that they didn’t end up crossing each other paths that December, and haven’t seen each other in nine years. Jesse has written a novel about the time they spent together, prompting Celine to attend his book signing in Paris. They meet outside, and the following seventy-five minutes follows the couple in real time as they just talk, and walk around Paris. And it’s seventy-five of the most enchanting, honest minutes I’ve ever seen in the movie.

I’ve watched Before Sunset as much as any other movie I’ve seen in my lifetime. There’s not a moment that drags, not a scene that feels false. It’s one of those rare movies that doesn’t feel like a movie at all, but instead a glimpse into real life. Even though it’s just two people talking for seventy-five minutes, the film builds and builds, almost like a suspense thriller, with Jesse having a flight he needs to catch, and demons of both their pasts slowly creeping out, leading toward a scene in the back of a car that is so startling in its immediacy and intimacy that it’s impossible not to have a gut reaction. Jesse drops Celine at her home, and follows her upstairs to listen to one of her songs. After she plays him Waltz for a Night, a beautiful song even if it were listened to out of the context of the film, she tells him, “You are gonna miss that plane.” Jesse smiles and says, “I know.” Fade to black. One of the most perfect endings ever.

The third film of a series, especially a sequel to a second film I love so much, is not supposed to live up to expectations. It’s not supposed to be made with the same texture and intelligence and care that the first two movies were made with. Before Midnight is a complete enigma, because one, it’s a film that doesn’t necessarily need to exist, and two, it’s a beautiful work of art that uses its unique history tied to two previous stories to create something extraordinary. I knew walking in that this wasn’t going to be a story of two people walking around Greece whispering romantic nothings into each other’s ears. In the early minutes of Before Midnight, we learn that Jesse did indeed miss the plane, and ended up moving to Paris to live with Celine, where they had twin girls, and have been together for the last nine years. This set-up creates a different dynamic to the film, because they’re not reuniting after a long period of time, but finishing up a Greece vacation with two kids in tow, and lots of tension brewing under the surface. It would have been false not to send Celine and Jesse to some kind of dark place sometime during the film, but nothing prepared me for the third act of Before Midnight.

The first two acts are beautifully done, with the kind of dialogue-heavy scenes we’re accustomed to in this series, as well as some scenes with an ensemble of actors that we’re not used to. One of my questions going into the movie concerned Jesse’s son, who we learned about in the second movie. I was worried that the focus would be on the new twin girls, and his son from his previous marriage would be tossed aside. I was thrilled to discover not only do we get to meet Jesse’s boy in the film’s first scene, but his character hangs over the entire movie like some kind of ticking time bomb about to explode. We don’t even see Celine for about ten minutes, and instead spend time with Jesse and his boy at the airport while he waits for him to board his flight back to the United States. It’s the perfect entryway into this third installment, making Celine’s reveal all the more powerful. A stunning fifteen-minute unbroken shot of Celine and Jesse talking in the car follows, and then we’re treated to a few scenes with an ensemble of actors where we finally, after three movies, get to see the two interact for a long period of time with other people. Even though we don’t know these other characters well, the intimacy remains, and the dinner scene give us a welcome glimpse into the couple’s social life. The section of Before Midnight that most resembles the first two movies takes place when Celine and Jesse take a long walk to a local hotel, where they’ve been treated to a night alone with a bottle of wine and a five star room, just the two of them. Their natural chemistry comes through in this long walking scene, maybe more than any other in this third installment. Then they arrive at the hotel. And go up to their room. And start kissing. And then the phone rings.

I’ve seen plenty of movies where two characters argue on screen. But I don’t know if I’ve ever had such a visceral reaction to the kind of biting, mind-blowingly honest argument Celine and Jesse have in that claustrophobic hotel room in Before Midnight’s third act. I care as much about these two characters as I do any characters in film history, so to see them battle with words, the same way heroes and villains battle in summer action epics, affected me deeply. “I am giving you my whole life,” Jesse says at one point. “I’ve got nothing larger to give.” The scene is unpleasant, brutal, cathartic, engrossing. So precise in its acting, writing, and directing, the way the scene builds and builds and builds all the way to a line of dialogue you hoped would never come. Just like everything we’ve come to expect in this series, the scene unfolds slowly, naturally, never with a sting on the soundtrack to tell us someone’s about to get mad. It’s a scene so perfect in its construction that it has to be seen to be believed.

There’s one last scene at a table outside, where the film ends leaving us unsure about Celine and Jesse’s future. While we hoped at the end of both Before Sunrise and Before Sunset that they’d end up together, at the end of Before Midnight we’re concerned if they’re going to stay together. The third installment could have just done what had been done before. But Linklater, Delpy, and Hawke are smarter than that, and they’ve given us a third film in this gorgeous series that questions everything that has come before, and asks us to identify with the age-old wisdom, that love is hard. Jesse and Celine are perfect for each other, there’s no doubt about that, but even a love as true as this will hit some stumbling blocks along the way. And one of those big stumbling blocks is on display at the end of Before Midnight. This is an extraordinary film, an important film, one I look forward to watching again and again.

One of the many remarkable elements of the Before trilogy is the way dialogue between two people for long stretches of time is never boring but instead is always fascinating, even suspenseful at times. I’m okay at writing dialogue that sounds realistic, but I’ve often struggled with making long scenes of dialogue in my fiction remain compelling from beginning to end.

Imagine you had to write a ten-page scene of dialogue between two people in a work of fiction. Who would the characters be, and what would they talk about?