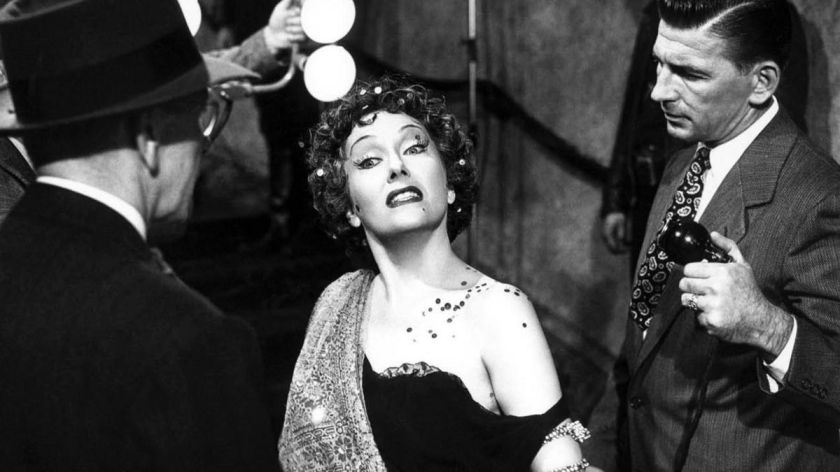 “I am big,” she says, tilting her head back, in a bold and proud manner, “it’s the pictures that got small.”

It’s one of the most famous lines in all of film history, and rightfully so: Billy Wilder’s 1950 masterpiece Sunset Boulevard is one of the great films in cinema history. It’s my personal all-time favorite, and it features my favorite performance of an actress in a motion picture: Gloria Swanson as Norma Desmond, the tragic, aging silent movie actress who tries to make one last go at both romance and fame.

The winner of three Academy Awards, Sunset Boulevard tells the story of an aspiring screenwriter named Joe Gillis (William Holden) who leaves his small town for big Hollywood dreams. He eventually finds work assisting a famous film actress Norma Desmond (Gloria Swanson), but as time goes on, Joe discovers that she is an icon no longer, and will only be destructive both to his career and to his life.

Swanson was not director Wilder’s first choice for the role — he wanted Mae West — but she turned out to be a perfect choice. Her character in Sunset Boulevard mirrored who she was in real life. A famous silent film actress in the 1920s, Swanson’s career took a nosedive when the “talkies” invaded the nation’s movie theatres at the end of the decade. By the mid 1930s, her career was over, and except for occasional small parts in B-grade movies, Swanson essentially disappeared from Hollywood, but then Sunset Boulevard marked her triumphant return.

In Sunset Boulevard, our protagonist Joe is in a rut: he can’t get a screenwriting job to save his life. He begs the head of Paramount Studios, as well as his agent, for work — a rewrite, a polish, anything — but no opportunities present themselves. He’s surprised, therefore, when the stars finally align, and he finds himself on the driveway of a famous movie star who’s looking for someone to write her a comeback vehicle. Joe begins working for the actress, and he immediately feels like he might finally catch a break.

The problems with Norma are apparent almost immediately. While Joe admires her at first because he’s in the presence of such a lauded movie icon, he discovers that she is no longer the famous person she used to be; even worse, the woman still thinks she’s a star. Every afternoon she has Joe take a break, insisting he relax by not watching just any movie, but her movie. He catches her signing hundreds of fan letters, even though it’s nonsensical that anyone still writes to her. He sees her applying a pound of make-up to her face, even though Joe and her servant are the only two people she ever sees. As the days drudge on, he realizes that Norma is living in a dreamland, where she is still on top of the world, even though most of the world had long forgotten about her.

Joe is not a stupid man. While he comes to appreciate Norma as a human being, he knows she will never help him succeed as a screenwriter. On a night on the town he meets a young studio employee named Betty who is looking to break out of assistant work and write a screenplay of her own. The two young dreamers decide to collaborate on a screenplay. But when the overprotective Norma finds out that Joe is working on a project on the side with someone else, she lashes out at him, and personally feels like he abandoned her for better opportunities. Norma, so wrapped up in her pathetic life, feels that Joe is her last tie to the real world, and therefore needs him to never stray from her again.

Joe is surprised when Norma receives a call from Paramount Studios to return to the lot where, back in the day, the director Cecil B. DeMille had transformed her into a movie star. She reunites with Mr. DeMille on the stages and believes he wants her to return to film acting in his next motion picture. But Joe discovers from her butler back at the mansion that the reason they brought her out to the studio was only to consider her old-timey car for an upcoming production. All of the realizations come to Joe at once: that Norma is no longer relevant, that Norma is an emotional wreck who suffocates Joe with her neediness, that the young writer is entrapped forever in her pathetic world unless he can escape.

At the end of Sunset Boulevard, Joe decides he needs to break away from the Hollywood life that has corrupted Norma to no end, and one that might swallow him whole. Even though Norma threatens to kill herself if he leaves, he packs his suitcase and takes off out of the mansion, anyway, but not without a fatal consequence: Norma stumbles out of the home with a pistol and shoots Joe twice in the front and once in the back. He slips into the pool and dies. In the end Joe left his small town in Ohio for bigger dreams and conquests in sunny L.A., only to fall victim to a mad, unstable woman with delusions of grandeur. Norma was never going to give Joe what he wanted; her only desire was to feed off his youth and instill in him a false belief that she may actually be the one to make all of his big Hollywood dreams come true.

“All right, Mr. DeMille, I’m ready for my close-up,” Norma says at the end of the film, her face covered in a pound of make-up, her eyes still big with impossible dreams like Joe. Swanson paces toward the camera, but her image goes out of focus before she reaches it. The actress never achieved greatness after Sunset Boulevard, but with this one film, she achieved something even more rare and astounding: cinematic immortality.

One thought on “What’s your favorite film of all time?”