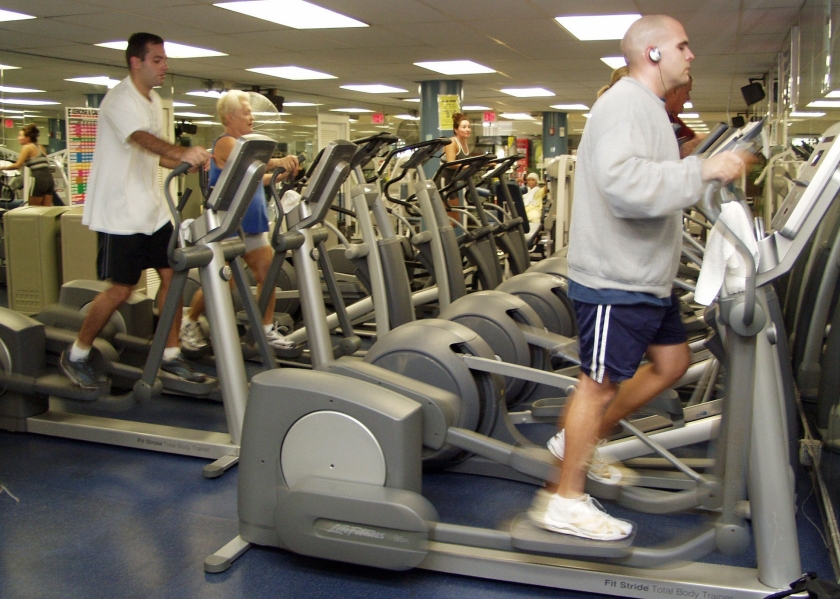 For at least three years I’ve been going to my local gym with a book in hand… and in all those years I have never, ever seen another person with a book of his or her own. I’ve never understood this. I’ve never come to grips with the idea that hundreds and hundreds of other gym goers prefer to just listen to their music and watch the muted CNN or Fox News screen.

I don’t know about you, but I wouldn’t be able to go to the gym as much as I do if I didn’t bring a good book. For the last few years I’ve kept my weight down, not always but enough of the time, and a lot of that has to do with my 3–4 trips a week to the gym. Some days, the worst days, I don’t bring a book, and instead do 30 minutes on the treadmill before moving onto weights. But about 90% of my days are first spent with 30–40 minutes on the elliptical with a book, and not just any book — a Stephen King book.

In 1996 my parents surprised me with a very exciting birthday gift: membership to the Stephen King fan club. In 1995 I had read my first King title — Carrie — which I proceeded to give a book report about to my fifth grade class and was then swiftly pulled aside by my teacher Mrs. Frodahl, who told me this book was highly inappropriate for me to read at this time. Her comment just made me want to read more Stephen King, of course, and by the end of fifth grade I had read Salem’s Lot and The Dead Zone.

My parents saw how much I loved reading his work, and instead of pushing me away from King, they did what great parents do: relished that their kid was spending part of the day reading and promoting more of it. The King fan club they gave me access to the following year came with something truly amazing: a new King hardback book shipped to our house every single month. Some would be his newest titles, like Desperation in 1996 and Bag of Bones in 1998. But most of them were his older titles, like The Shining, The Stand, Christine, Cujo, books I devoured as soon as they arrived at my doorstep.

I read works by other authors during middle school and high school, but I was never loyal to another author the way I was to King, and by 2003, when I graduated high school, I had read at least 75% of his entire output. But then I went to college in Los Angeles, and my mother discontinued my membership to the fan club (oh, the horror!) and my reading of King floundered almost instantly. I read a few of his works over the next decade — Under the Dome and 11/22/63 I didn’t miss — but when I sat down in October 2013 to read Carrie again, before the release of the disappointing Kimberly Pierce remake, it struck me that I had actually missed a lot of the King books over the years, especially ones he released between 2003 and 2011, but also many he’d written beforehand, including — gasp — the entire Dark Tower series.

I was going to revisit The Shining for my MA in English annotated bibliography in the coming months, and it got me thinking: I still owned about 80% of his books, in hardback, many I’d read in middle school and high school, but also some I’d never cracked open. I was currently reading his debut novel, with the idea of moving on to his second book, Salem’s Lot, in time before Halloween. My life, in essence, was always a little happier with Stephen King in it, so I thought, why not go through his entire bibliography — yep, the whole entire thing, one book at a time, in order of when they were published?

There was no deadline to this.

It would probably take at least ten years to get through it all, if not longer, because I didn’t want to only read King. And when two years later, in the summer of 2015, I recognized I had ONLY read Carrie, Salem’s Lot, The Dead Zone, and his Night Shift collection, I decided I needed to do something to pick up the pace.

Around the same time I joined a new gym, and that first week I brought his Bachman Books collection to read while on the elliptical, for the most part to avoid total boredom, but by the end of that session, I recognized how much I had loved working out on the elliptical without listening to music, without watching the TV overhead, but immersed in the world of Stephen King. I thought trying to read on the elliptical might give me a headache. I certainly can’t do it on the treadmill, but reading on the elliptical, while not IDEAL I guess, is just fine for 30–40 minutes at a time, so I started combing through the early King titles I had on my bookshelf and decided to read one at a time not in bed at night, not whenever I could, but when I went to the gym.

And that’s what I’ve been doing for the past three years.

I go on average three times a week, sometimes four or five, but at the very least two. I read 30–40 pages from whatever King book I’m in the middle of, usually about a page a minute, and this is what I’ve read in his bibliography at the gym thus far, moving past those first five titles (Carrie, Salem’s Lot, The Shining, The Dead Zone, Night Shift) I read before I joined in 2015…

The Dark Tower: The Gunslinger (224 pages) (had never read before)

The Talisman (646 pages) (had never read before)

The Eyes of the Dragon (326 pages) (had never read before)

The Dark Tower II: The Drawing of the Three (400 pages) (had never read before)

The Tommyknockers (558 pages) (had never read before)

Four Past Midnight (763 pages) (had never read before) (CURRENTLY READING)

Okay, so I’m not going in STRICT order all the time. Like, Four Past Midnight was released the year after The Dark Half, which I haven’t gotten to yet, and I’m also occasionally reading his newer work at the gym, like Revival and Gwendy’s Button Box (I’m going to read his Sleeping Beauties later this summer). But I try to keep it close for the most part, like, within a year or so whenever possible.

If the book is 500 pages or less, I need to complete it in a designated month.

I already know the exact King titles I’m going to be reading through December 2019, and you know what’s so great? I already OWN them all! I don’t have to go in search of the books at the library, or try to find a used copy at one of the local indie stores. They’re already sitting on my bookshelf, ready to be cracked open again, or for the very first time.

In the summer of 2015 I weighed 225 pounds. I wasn’t taking as good of care of myself as I should’ve. I decided to go to the gym more, and also run in my neighborhood a few days a week, and I’ve kept to those goals the last three years.

I don’t have a six pack. I’m not as strong as I’d like to be. And I could probably spend more time on weights at the gym than immersing myself in my latest King story.

And in many ways, I have Stephen King to thank for that.

Reading King these past three years has made me want to go to the gym, not dread the trip, not avoid it. Some days I think to myself, let’s skip the trip to the gym, let’s just go for a quick run around the block, but then I remember I’m at that good part in his latest story, the return of the son in Pet Sematary, or the foot dismemberment in Misery, or the latest entering of a mysterious doorway in The Dark Tower. This practice has made me excited to go to the gym, and I wouldn’t have it either way.

Now, if you’ll excuse me, I’ve got a visit with The Langoliers calling my name from an elliptical down the road…

3 thoughts on “How Exercising Can Make You a Better Reader”